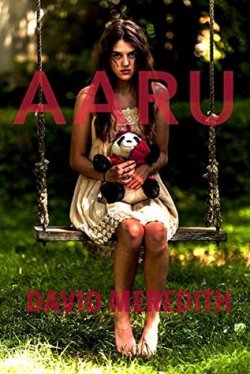 Book procurement:
Received a copy of the book from the author for an honest review

Rose is dying. Her body is wasted and skeletal. She is too sick and weak to move. Every day is an agony and her only hope is that death will find her swiftly before the pain grows too great to bear.

She is sixteen years old.

Rose has made peace with her fate, but her younger sister, Koren, certainly has not. Though all hope appears lost Koren convinces Rose to make one final attempt at saving her life after a mysterious man in a white lab coat approaches their family about an unorthodox and experimental procedure. A copy of Rose’s radiant mind is uploaded to a massive super computer called Aaru – a virtual paradise where the great and the righteous might live forever in an arcadian world free from pain, illness, and death. Elysian Industries is set to begin offering the service to those who can afford it and hires Koren to be their spokes-model.

Within a matter of weeks, the sisters’ faces are nationally ubiquitous, but they soon discover that neither celebrity nor immortality is as utopian as they think. Not everyone is pleased with the idea of life everlasting for sale.
What unfolds is a whirlwind of controversy, sabotage, obsession, and danger. Rose and Koren must struggle to find meaning in their chaotic new lives and at the same time hold true to each other as Aaru challenges all they ever knew about life, love, and death and everything they thought they really believed.

The last book I read written by David Meredith was a Snow White retelling, or rather post Snow White, written in beautiful, flowing tones reflecting the fantastical fairy tale world. This book moves across that genre slightly to a more modern, science based world. The difference in style caught me off guard when I started reading. I didn’t know what to expect for the remainder of the book. After a rather slow start it started to pick up towards the end and into a brilliant end.

Also, I liked the references to real life characters and places, altered for copyright reasons I’m sure. Jonas Perry – I see what you did there Mr Meredith.

The story focuses on two main characters. Rose is sick and dying. Her hope comes one day in the form of a virtual paradise called Aaru, built by Elysian Industries (side note: Elysian means relating to or characteristic of heaven or paradise). Koren is Rose’s younger sister who looks up to her older sister and hates seeing Rose on her deathbed. Once Rose is sent to Aaru, she becomes the spokesperson for Aaru as the grief stricken sister who can still be with her now virtually immortal sister.

What begins as a beautiful after life for both sisters, they soon learn to come to grips with the various aspects of their new lives. Rose in the virtual world questions what it all is. Koren realises that being a celebrity is not all its made to be.

Lastly, there comes an intense danger to both sisters that completely rocks the very foundation of their new lives. I want to say more but it will become a spoiler so…

Initially the book was a bit slow. In a sense boring, and as much as I understand it was Mr. Meredith’s way of getting us to know the characters, some of it felt a little to drawn out. In my opinion we spent too much time with Rose in hospital, though I guess it helped to ground me in the idea that she was practically hopeless. Which makes the introduction of Aaru all the more compelling both to me as a reader, and to Rose as the recipient.

While I appreciated the slight references to real world characters (Jonas Perry, Ronaldo Casillas etc), it also ruined the illusion that this particular story is taking place on “this” Earth or “this” reality. It’s nothing major but it did distract me because in my head I kept changing in-book characters with their actual real-life counterparts.

The real story here in Aaru, despite the whole thing with Koren and Rose, is this idea of life after death. There were some religious crazies making appearances, questioning the whole idea of God, and how Elysian Industries is in a sense playing God. Elysian then states they are not playing God, but rather providing a platform where those who are about to die can continue to live on in their virtual world. In Aaru. But… are they really living though?

Unfortunately with these kinds of books, Christians are never depicted as anything other than ignorant idiots believing some old tome with religious zealousness that has no actual understanding of God. Using the bible as a means to justify their unjustified beliefs. Its an unfair portrayal and one held by too many people. Sadly, sometimes its true. (End Rant)

From the Christian perspective of not just reading the bible but learning of God’s character and our role (humans) as His creation, the soul cannot be downloaded into a computer. The mind? Sure. It is data after all.  The question all these Sci-fi kinds of stories ask is: Is the mind extracted into data, living as a remnant of the actual person, the person themselves? Or are they merely mind-data acting as data is expected to, in light of the tons of memories stored in hard drives, defining who they, as the “mind-data”, are supposed to be? I think of Transcendence with Johnny Depp.

Once I got through to halfway in the book, the whole story dynamic changed. It changed in the sense that there was finally some action. It’s all good and well to read about a soccer match straight out of Inazuma Eleven or Shaolin Soccer or reading about people flying and creating mansions (oh the biblical references in this book), and the romance building up, but all of this is the fluff around the real story. The story which is the idea of life after death, as explained above, but also the privacy and safety of being a celebrity.

The second half turned into a brilliant thriller and I loved every part after that. If the book had started out this way, I might have enjoyed it better. There were some uncomfortable scenes, necessary for the story, and this second half just didn’t hold back at all. To that, I give Mr. Meredith great credit.

All in all, if the second book (which is part of the first book in the Aaru Cycle) continues where this book ends off, I’ll be very happy.

Did you know: David Meredith teaches English in the Nashville area. This is his second published book.

David Meredith is a writer and educator originally from Knoxville, Tennessee. He received both a Bachelor of Arts and a Master of Arts from East Tennessee State University, in Johnson City, Tennessee. He received his Doctorate in Educational Leadership (Ed.D.) from Trevecca Nazarene University in Nashville, Tennessee. On and off, he spent nearly a decade, from 1999-2010 teaching English in Northern Japan, but currently lives with his wife and three children in the Nashville Area where he continues to write and teach English.

Are you an author who wants your book reviewed? Contact me on my site: NthatoMorakabi.com

Nthato Morakabi is a South African published author. He has short stories appearing in both international and local anthologies, and has published his first book, Beneath the Wax, which opens his three-part novella series "Wax". He is an avid reader, blogger and writer.
View all posts by Nthato Morakabi »
← Me
Friday Fiction: The Best Gift →