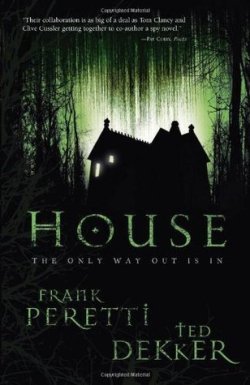 A mind-bending supernatural thriller from the creators of This Present Darkness and Saint.

Frank Peretti and Ted Dekker — two of the most acclaimed writers of supernatural thrillers — have joined forces for the first time to craft a story unlike any you’ve ever read. Enter House — where you’ll find yourself thrown into a killer’s deadly game in which the only way to win is to lose… and the only way out is in.

The stakes of the game become clear when a tin can is tossed into the house with rules scrawled on it. Rules that only a madman—or worse—could have written. Rules that make no sense yet must be followed.

Ted Dekker is one of those authors whose books can be action packed and fast paced, and sometimes slow and drawn-out. I’ve liked 2 out of 3 of his books I read. This one sounds like a good read too. I haven’t heard anything about Frank Peretti though so I cannot offer any insights on that regard.

Nthato Morakabi is a South African published author. He has short stories appearing in both international and local anthologies, and has published his first book, Beneath the Wax, which opens his three-part novella series "Wax". He is an avid reader, blogger and writer.
View all posts by Nthato Morakabi »
← #FindJoziFlash17 Cover Reveal
#NaNoWriMo Progress: Week 1 →