RSS Feed
← Focus: The Bane of my Writing
Microcosmsfic Flash Fiction – The Daughters of Nereus → 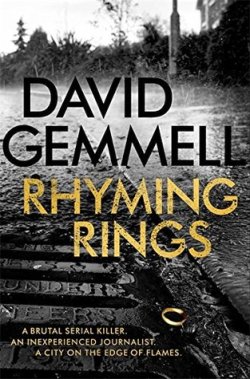 David Gemmell was the UK’s number one fantasy and historical novelist until his death in 2006. A regular Sunday Times bestseller, and international sensation, his legacy lives on through his novels, his influence on the genre, and through the David Gemmell Legend awards.

Rhyming Rings is a never-before-seen Gemmell novel, discovered in his papers by his widow, Stella Gemmell. Merging autobiographical details of Gemmell’s life as a journalist in South London with a serial killer and a tinge of the supernatural, this is perfect for fans of David’s work, as well as readers of gritty crime novels. Set against the backdrop of a London simmering with poverty, change and racial tension, this taut thriller is a fitting legacy for the great writer.

An ambidextrous killer is murdering women, leaving virtually no evidence behind, and struggling journalist Jeremy Miller wishes he was covering the case. Instead, he’s stuck with heart-warming local stories about paraplegic teenagers and elderly psychic ladies.

So when his stories and the murder case start to converge no one is more surprised than Jeremy.

Or, it turns out, more at risk.

Drew from The Tattooed Book Geek picked this up in his book haul and I was immediately intrigued! Looking to pick this up too!

David Andrew Gemmell was a bestselling British author of heroic fantasy. A former journalist and newspaper editor, Gemmell had his first work of fiction published in 1984. He went on to write over thirty novels. Best known for his debut, Legend, Gemmell’s works display violence, yet also explores themes in honour, loyalty and redemption. With over one million copies sold, his work continues to sell worldwide.

Nthato Morakabi is a South African published author. He has short stories appearing in both international and local anthologies, and has published his first book, Beneath the Wax, which opens his three-part novella series "Wax". He is an avid reader, blogger and writer.
View all posts by Nthato Morakabi »
← Focus: The Bane of my Writing
Microcosmsfic Flash Fiction – The Daughters of Nereus →