Wednesday Book Review: The S.K.A. at Carnarvon – A TROJAN AFFAIR 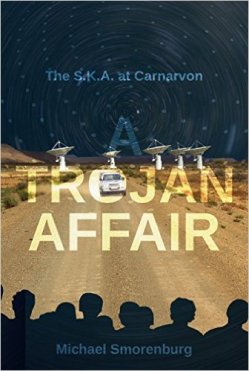 Title: The S.K.A. at Carnarvon – A TROJAN AFFAIR

Genre: Gee this took a while to slot in… hesitant to call it a Religious mystery….

Book procurement: Received a copy from the author for an honest review.

Dara Singh is seventeen. Gregarious and with an Oxford accent, he carries the dark Indian skin and fine features of his evolutionary psychologist father. He is dangerously innocent to the fundamentalism and dogma of the predicament he’s suddenly thrust into.

His American astrophysicist mother, Marsha, has taken on a contract to help build the SKA, the $2.5-Billion Square Kilometer Array radio telescope network.

This sees the family relocate to the dusty desert town of Carnarvon in South Africa’s arid Northern Cape. It delivers Dara into the heartland of a staunchly conservative culture.
Next year he’s off to finish school in the city, but with 3 months to kill, he’s made the fateful decision to seek new friends by enrolling at the local school. Alas,

The Dominee, the town’s preacher, considers the SKA a direct challenge to Genesis.
Better yet, only the preacher knows that an Evangelic group from America’s Bible Belt has secretly offered to bankroll his struggle, and the cantankerous old man is already well advanced in mounting a renegade resistance against the vast scientific infrastructure.

On sight, in Dara, the SKA now has a face for the preacher—a dark dark foreign face.
Neels, the preacher’s youth leader and school bully, targets Dara, not just to exact revenge for the town’s anguish, but because his pretty girlfriend, Sonja, moves to protect the outsider… an action that will bring scorn from her father if he finds out her alliances may be suspect…

And so unfolds a cascade of intrigue, agendas and unusual alliances.

I literally just finished this book and I’m reeling from all the implications that the book carries, although categorically a book of fiction, the details outlined in the story tread across multiple factual truths as well as unfortunate distortions, intermingled with very controversial issues. Kenneth Bacon and his Genesis Answers group would be sourly displeased <- I love this injection of fictionalized truth.

From a character perspective, I must immediately state that the scientists are represented by a myriad of colourful, sophisticated, intelligent, cultured people across the range while the religious are clumped into one simple, shortsighted, racist group of bigots. Their arguments always fall short and show no sign of any intelligence – their answer is strictly biblical naivety. Granted, the location of the story and the cultural background of these characters can be used to justify their mentality, but having a renowned scientist having a debate with these remote individuals is far from a legitimate argument. Like arguing with a child. Even the reference to the “American” version of these religious “Calvinists” and “Evangelicals” does nothing to represent a very intelligent portion of these groups. So from that standpoint, I found the book solemnly one-sided. But it builds up that climatic end like the biblical rains of Noah’s time.

All of that, however, made for a very interesting book and we see Dara, the Indian boy from Britain, uninformed and unsuspecting, dive into a severely racist town. He is met with abject hostility. Man did I cringe. Not just from the slurs, which authenticated the book, but from the trials he had to face, one especially big I didn’t want believe could happen. We see his mother, who is an astrophysicist, work through these issues as both a mother and a scientist. We are faced with a “typical” Afrikaans boy who, in that culture and setting, is the epitome of expectation and how he deals with Dara’s appearance. We have the local pastor who staunchly stands against the S.K.A, the other races that have infiltrated their holy land, question their God and the degree by which all the developments drive him. A smattering of other varying individuals make appearances, falling into either end of the argument, all adding fascinating aspects to the story.

And the tension. So much tension in the book from the word go, right through the pages. And perhaps all of the controversy so close to home jolted it all up a notch. Science is of the devil and must step into the realm of God and religion. This is the topic that not only pulls the story together, but thrusts it forward with unrelenting intrigue and drama. And then it all rolls out from under the table like a giant spider that snares both sides in a twist I did not see coming! Woo!

The writing is smooth and transitory – and Michael Smorenburg doesn’t hold back. I’ve actually learned a few words myself and have learned the true meaning of some of the slurs I’ve heard myself. Really insightful. It is also clear that the novel was written with an audience that doesn’t understand Afrikaans in mind, which at times was an annoyance to me to have it translated. However, the translation is molded into the story cleverly to clarify the preceding texts. I’ve read other books where the author doesn’t do this (Kill Baxter, Dark Things, Moxyland) and it doesn’t change the story, merely adds authenticity to it. No one really translates their own language to English as they think or speak anyway. But it works in S.K.A.

Any book that makes me question my own beliefs and challenges my thinking, is a book worth reading. I feel as though many would fall into the “I agree with the author” route and with good reason, but as my review has, I hope, clearly defined for you that I neither agree nor disagree with either party represented in the group. Although I think which way the author falls is pretty clear. Nonetheless a fantastic book that has truly wound me up.

Rating: An authentic 5 out of 5

Nthato Morakabi is a South African published author. He has short stories appearing in both international and local anthologies, and has published his first book, Beneath the Wax, which opens his three-part novella series "Wax". He is an avid reader, blogger and writer.
View all posts by Nthato Morakabi »
← Discovery Writing: My Plotted Guide to Pantsing
Writer Values: Time →