I don’t know what happened to my weekends but these last two Fridays flew by before I could even lift my head. Both Fridays were exceptionally well spent so no regrets, but to make up for it, here is a triple whammy Friday Fiction, and the first post prompts are:

Sentence starter. The prompt must begin with the following sentence:

I awoke to the sound of…

I awoke to the sound of metal scraping across brick; intermittent grating echoing across the fog of sleep. In the next moment I was up on the bed, throwing the blankets off and on my feet as the world swam in murky shades of grey and colour. In the distance I could hear the toll of the bell; a warning sign of an imminent danger. My teeth rattled at the continuous scraping that was surely coming from outside my cottage, and from the sounds of it, it was circling me. It was also then that I noticed the mismatch of colour; half the wooden door carried its aged dark brown of battered wood and the other half sagged in a dull grey. I spun around the room, watching as though through a child’s moving picture box, the world flitting from a drabby colourlessness to rich vivid colour.

My name reverberated across the walls of my cottage, a familiar voice that filled my chest with dread; Thomas.

“Come now great magician, come see what your magic has wreaked upon the lands!”

The voice booms far louder than any normal man should be able to, and I shudder at the possibility that he has managed to tap into his hidden magical potential. But the continuous grating of what must be his sword against the brick walls, reveals that he is still his same brute self. An animal . I hear him move towards the door and then there is silence.

“EDWARD!” My name is followed by banging that rattles the frame and sends dust flying.

“What is the meaning of this Thomas!” I cry at the door, though I hear the quiver in my voice. I am quite aware that I am not guilty of any magic but the man instills an irrational fear within me.

“Open up oh great and powerful magi of the third order. The king demands your audience!” His sarcasm drips from his lips like venom. I move towards the door and attempt to open it menacingly, but the large man as wide and tall as the door itself seems less likely to be intimidated by my scrawny self. His large bulk swims between colourlessness and full on ugly, scarred, muscled mass that has clearly spent too much time in the sun. His bearded face scowls at me. He steps aside and gestures at the stretching grey/green grass the extends from my cottage towards the village.  To the side is the abandoned castle, with it’s broken tower and everything looks normal. I’m not sure what he means and the grey filament over my eye is beginning to both annoy and worry me 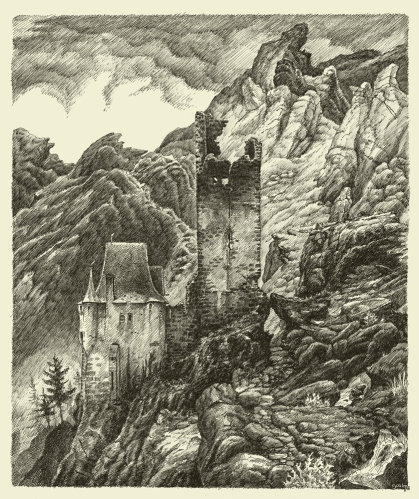 “What am I looking for, you giant brute.”

“The world! It has lost its colour.”

“The world has lost…” The grey murkiness intermingles with the vivid colour and I feel the tug of my internal system bucking against what has to be a virus of sorts; an enchantment against sickness that had been cast on me at birth. I touch a hand against the pendant on my chest and cast a healing enchantment, watching the world shimmer back to colour.

“It’s a virus. It must be.” The world immediately dulls out and disappears into bleakness completely and Thomas stares at me with a worried look.

“Is this not one of your spells gone awry?” He asks. The slight tremble in his voice makes me more anxious.

“Well then we’re in serious trouble. The whole village has lost colour in its vision. Ma was the first to tell me. Old Lincoln in beggar grey says he’s glad we will all be equal now, that the King will no longer flourish his robes of purple and gold rings in our faces. It is this talk that has brought me here.” With his anger gone, the brute is almost a child and I feel pity for him, only for the reality of it all to sink in completely. The golden sunsets and sunrises. The purple flourish of robes. The swirl of emerald dresses. The silver sheen of dew on grass. The azure sky. All nothing but dreary monotony.

“Thomas,” I begin to say, but the words fail to form, as I imagine a colourless world.

Nthato Morakabi is a South African published author. He has short stories appearing in both international and local anthologies, and has published his first book, Beneath the Wax, which opens his three-part novella series "Wax". He is an avid reader, blogger and writer.
View all posts by Nthato Morakabi »
← Wednesday Book Review: The Program
Triple Friday Fiction #2: October →