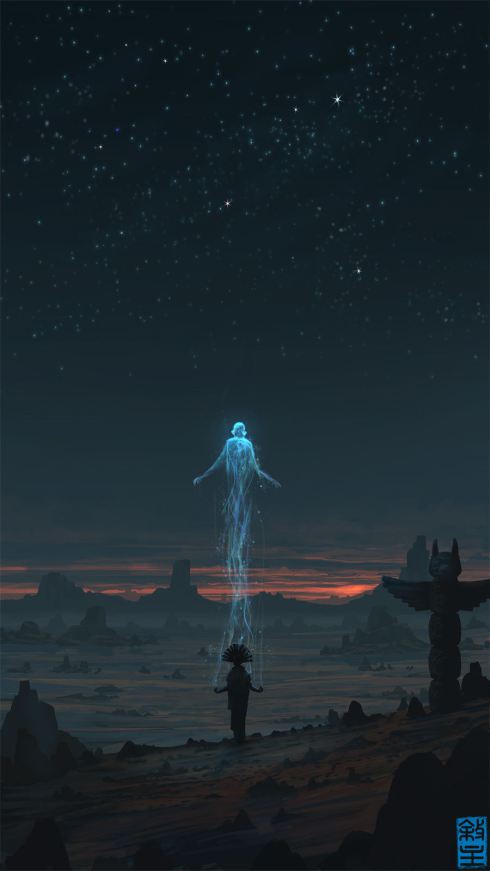 The world of man was infected. Disease riddled bodies cascaded between the mountains, across the arid landscape, unaware of their own infinitesimal existence in the greater scheme; they were like ants. The old man watched them pass by without a second glance, his own eyes focused heavenward. The call was stronger today, a magnetic pull drawing his being to the stars above and yet it was not time to go yet, night time would soon come and so would his ascension.

“Hey Prof, did you see that guy up on the hill?” The young man lifted his dark cap to wipe his brow with the back of his hand, dark locks clinging to his scalp hidden once again as he replaced the cap.

“The Shaman? Yes I did Alan.” Prof was an older gentleman topped with greying hair and wire-frame spectacles. His slight English accent more often than not had people assume he was a professor of sorts, hence his nickname.

“What’s he doing up there?” Prof’s face softened as he went into thought, a familiar look to the other young man,

“Well judging from the months and the current constellation that should be visible at this time of the year, I would say he’s about to cross over.” The young man stared at Prof confused

“Hmm yes. Shaman have the ability to enter the spiritual realm, communicating with both the living and dead to alleviate unrest, unsettled issues and deliver gifts to the deceased spirits.”

“That was a Wiki entry. Curse my impeccable memory.” The older man smiled.

“Do you…do you think he’d be upset that we are here?”

“I doubt it. We are just passing through and there is no harm in our little excursion.” Prof could see the doubt in the young man’s eyes but could not understand why. It was as though a deep fear had settled on the younger man but surely it was unfounded.

“Let’s unpack the gear and get ready to camp, we have a long journey ahead of us tomorrow.” Prof said sliding his  backpack off his back.

The world of man was infected. Disease riddled bodies lounging out in the sand, unaware of the call the stars were making upon their souls – their filthy, darkened souls. The Shaman had been unable to understand the bidding he received, he couldn’t expect mere man to comprehend it too.

The sun was setting. The landscape was awash in hues of orange and brown, the colours of fire. Of death. Soon he would leave, but first he had to clear the earth of the disease; then his ascension would be truly complete.

“…and no one heard the footsteps of the man until it crunched against the sleeping bag of the youngest camper. He sat up abruptly – by then it was too late. The hook…”

“Okay okay I get the point.” Alan shifted on his sleeping bag laid on the floor, ready for when they would sleep later. At the moment, the sun was slowing slipping behind the mountains in the distance, casting the last of its light over the darkening land,

“Oh come on, its just a fictional tale, no fact whatsoever, Alan.” Prof was propped up on a camp chair looking down on the younger man; the flashlight below his chin only made the story more frightening.

“Well it doesn’t mean I can’t get the heebie-jeebies over it – and shut that thing off, you’ll bring out the coyotes or something.”

“You think my face makes the bat signal?” Prof flicked the light on an off below his chin, his grin both humourous and terrifying.

“Stop” Alan replied with a smile. His eyes darted towards the mountain top.

“That Shaman got you spooked well and true.”

“Not really.” He hesitated. His mouth open but no words came out until finally he let loose, “It’s just that I’ve been having this…feeling. It’s weird, I know, but its a strong feeling as though we are being watched. Not like that sensation on your spine but my entire body is tingling; it’s like we are being watched from everywhere.”

“Paranoid. A suspicion and mistrust of people or their actions without evidence or justification.”

“I know what paranoid means, I meant what as in how could you assume such a thing about me.”

“You are displaying all the…” A howl cut through Prof’s explanation. Both men sat up, Alan looking far more worried than before while Prof tried to play down his fear.

“Just wild coyotes. Probably did call them with my bat signal face.”

“For an old man you sure can be a child sometimes.”

“For a young man you sure can be an old man sometimes.” The two stared at one another, pleased they were in each others’ company and not alone in the suddenly chilling terrain.

The world of man was infected. It was time to cleanse; the stars above were sparkling. a particular star calling. Words bubbled from the throat, caught on the lips, danced on the tongue; the body shook uncontrollably. Unintelligible, sporadic – ancient power and wisdom poured from the skies and washed over the body, pulling at the soul within, calling to the ethereal, to the spiritual.

“Holy smoke Prof look!” Alan pointed across the landscape to the hillside where a bright cobalt light pulled from what appeared to be a man cavorting under its light. It took a moment for both men to realize it was the Shaman and the light was… his soul?

“So what happens… when he, ascends?” Alan’s eyes did not move from the scene ahead of them

“He…” Prof’s eyes widened, panic rising in his gut, hands twitching as understanding dawned on him “He’s going to cleanse the land.” He turned to face the younger man, his face a reflection of what the older man was feeling; fear.

Nthato Morakabi is a South African published author. He has short stories appearing in both international and local anthologies, and has published his first book, Beneath the Wax, which opens his three-part novella series "Wax". He is an avid reader, blogger and writer.
View all posts by Nthato Morakabi »
← Villainous Villainy – What madness is this!?
It’s ‘mah Job →