Challenge Day 1 – Lion in the deep

Day  1 – Today’s challenge came about from reading another post which inspired this idea. I would suggest you read that post first before mine to get a better context – http://stefgeng.wordpress.com/2013/09/16/the-unexpected/. I decided though to take the other aspect of the story, adding a bit of African flavour to the names (which I have explained at the end of my post). I do hope you enjoy! 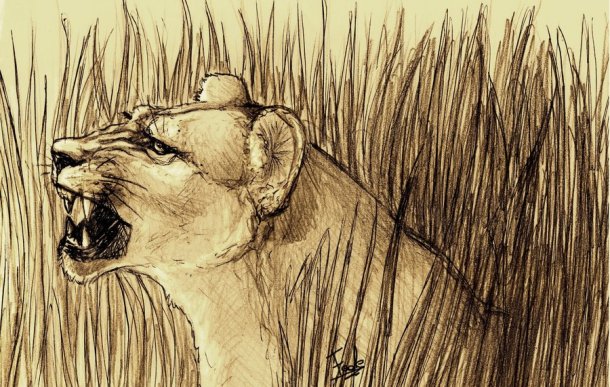 The shade was there; cool, alluring, tempting – distracting. The temptation to abandon this little escapade had crossed my mind more than once in the last five minutes. The tall thin grass, brown and dead, rose above my crouching form, the sun beating relentlessly down on me; but there was shade…right there. I could lounge in it, wallow in the cool, refreshing umbrella of tree branches and leaves. But no…I’m on the hunt and the pack is relying on me. I can sense rather than see uMama and uSisi, crouching on either side of me yet further off, stealthily creeping through the grass – they make no sound. They are slowly encircling their prey…our prey, I must remember its our prey. The large antelope isn’t even aware of our presence and the urge to jump up and scream at it to run bubbled up my throat. I barely managed to hold the scream in, a tiny moan escaping up my throat in the tiniest of growls. The antelope’s head suddenly perked up, its ears flicking up as though to hear better – my growl had alerted it and now it would run, surely. I remained as I was, still. My mind seemed to be buzzing in uncertainty, a full scale mental battle that blotted out everything else around me. Run antelope run! A part of me screamed but another part, a quieter and stronger part spoke up above the scream; kill, kill, kill! Hunger rumbled through my abdomen like thunder. The antelope’s ears had dropped, yet it remained alert as it began to flit through the grass…towards me.

uSisi Khanyi had not been the same since her disappearance some many nights ago. She’d come back timid and hesitant – uMama said it was because of the humans. I believed her. We’d seen them roar by on their large beast that rolled rather than ran, carrying some animal or other animal on the beasts back while they watched us apprehensively. uBaba had given us direct instruction to steer clear of the tall, thin creatures that walked on two feet, warning us that even though they were weak and frail, they carried weapons that would render us useless. I don’t even remember when we first noticed that uSisi had not returned, thinking that she’d gone off to hunt but after the third and fourth night she’d not returned, uBaba went off to search for her. The person he brought back was not uSisi, not one bit.

The antelope was here, its earthy scent permeated the air around me in a fragrance that set my appetite afire. There was only one problem; I couldn’t kill this poor creature. Yes hunger. But…what was it? I couldn’t understand it, a feeling that suffused through my chest into the beating organ in there. The thought of killing this creature turned that beating organ cold and dark and a sadness clouds my mind. What is this! Compassion!? For my food!? Never! Why!? I’d rather eat grass or slink off to be there, under the cool shade of the tree, away from the running and hunting and killing – and sun. Surely there is a better way than all this crouching in tall grass and sneaking and ripping with my claws. Let the pride hunt, I’ll just eat with them.

“Umtwana wam, she has not been herself ever since I found her where I knew she would be. Many of us had been found there, thin and frail, their ability to hunt lost – their eyes no longer gleaming with the eyes of a hunter. Pathetic. That’s how they all became and there she was, thin, frail and forlorn – pathetic. She’d stood to face me when I’d approached her, first retreating when I’d approached her but recognition lit up her eyes followed by a tiny glint of the huntress within her. Even as we escaped and she fumbled behind me unable to use her legs, she persevered through the trails, past the tall, grey, crisscrossing borders that separated the grassland from the human land and past the single pole rising out of the ground showcasing the head of a human skeleton and some bones. She stank too, a stench that was all too unnatural and pungent, causing my nose to burn from its strength. It was an unmistakable stench that reeked of humans and as we approached the encampment where the pride resided, I knew they could smell, her. They encircled her, watching her, their noses wrinkled in disgust from both the smell that shrouded her and from their loathing towards her return. She timidly hid behind me. I watched the pack, knowing they would pounce on her, kill her now rather than see her disgrace the pack in her inability to hunt. The atmosphere was intense, heavy; static. She let out a sound that was neither a growl nor…lion, it was shrill and loud and startled one the approaching males – in that instant she swung her paws across his face, spouting blood from his face. He shrunk away from her and that was enough to gain some confidence as each individual drifted off into the encampment but each of them would never forget, the sound that she’d uttered; it was a human sound.

Hunger was stronger than my compassion, instinct overriding emotion. I could not go hungry, the clan could not go hungry; we had to eat. The attack was quick, swift – easy. I pounced and the antelope let out a startled yelp, its large black eyes widening in shock and fear before glazing over as my paw struck its head hard, twisting the neck to an improbable degree. I stood over the body with both pride and unease as I watched uMama and uSisi pounce out of the grass towards the dead buck. I accepted their growls of approval and my confidence rose at their praise, but that yelp that the antelope had uttered, it was too…familiar, too…human. Was it “Please”? It couldn’t be, no how could I have understood that? A glint caught my eye as uSisi gnawed into the meat, a shiny metallic piece that was attached to the buck but uSisi tossed the object off into the grassland and by then, my hungry stomach could smell the raw scent of fresh meat. With a delighted snarl we feasted.

Off in the scorching heat of the grasslands, lay a metallic tag, one that belonged to a young buck once captured by humans. The tag would lay in that grassland for ages, rusting with the passing seasons, buried by dust and grass until it is but another part of the Serengeti.

Well I wrote this already and only now does it relate to my post but the days haven’t passed that much that it would be a hindrance…would it? http://dailypost.wordpress.com/2013/09/17/daily-prompt-perspective-2/

Nthato Morakabi is a South African published author. He has short stories appearing in both international and local anthologies, and has published his first book, Beneath the Wax, which opens his three-part novella series "Wax". He is an avid reader, blogger and writer.
View all posts by Nthato Morakabi »
← Writing Challenge: Is he crazy!?
Challenge Day 3 – Mirrors →